What Brings You to Wisconsin?

What do you do when you visit Chicago?

Surely, the Chicago River might be a draw if you’re visiting the city. Not for me… Or the giant bean? Naw…

Nope. I drive to Milwaukee. You see, my pursuit of seeing new places has reached a near-fever pitch. It draws the question: What are you looking for?  A question I’ll pose to the nearest shrink or bartender at some point when I slow down.

In the meantime, let’s address a more pressing question: Why Wisconsin?

A little more than a year ago, I was in Minneapolis for a wedding where I unearthed one of God’s gifts to man: The noble cheese curd. For those of you who have not yet made the discovery, cheese curds are the marble-sized solid parts of soured milk. They’re a popular bar food in Canada and the American Midwest. According to the Wikipedia article, they’re sometimes called “squeaky cheese” because they squeak when you chew them. I never slowed down enough to test that theory. They were too freaking good.

I’ll try virtually any food and have been known to be disappointed by some. The cheese curd didn’t come close to disappointing. At that wedding, I probably ate three baskets of the tiny fried goodness. The bonus about eating so many cheese curds is that they stick with you for a while. Simply put, you don’t have to eat much of anything else for a few days after consuming a basket of curds. Let alone three.

I haven’t enjoyed a curd since. After all, obtaining them is not easy for a guy from the American South like me. Sure, we have our share of fatty foods (fried chicken, biscuits, fried Oreos, fried butter, fried lard, I could go on…), but none of these things compare to fried cheese curds. One of the reasons they shined so brightly in my memory is that they’re so hard for me to get. Not to mention, I’m on a diet which strictly forbids the consumption of . . . well, just about everything with any flavor. And of course, just about everything includes cheese curds. But, it’s okay to cheat every now and then. Right? So, when discovering something as glorious and difficult to obtain as a cheese curd, temperance isn’t a consideration. Instead, it’s about volume. It’s about eating as many as possible. It’s about gorging. “Get ’em while you can.”

So, if cheese curds in Minnesota were so good, imagine just how incredible they must be in America’s Capital of Cheese: Wisconsin! 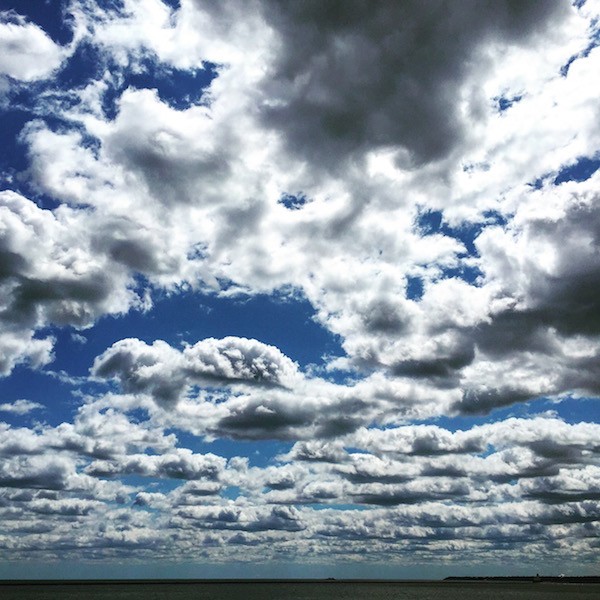 Located right on Lake Michigan, the view from the bank can be quite stunning.

Now you understand why I made the trip?

So, after pulling into Milwaukee and indulging my brother with a trip to the Harley Davidson Museum, we headed to Yelp’s recommendation for “Best Cheese Curds.” A bicycle with a motor and a sidecar.

As an aside, it would probably stand to reason that most any travel report about Milwaukee would center on the Harley-Davidson Museum. This one won’t because I had no idea what I was looking at. To me, it looked like somebody in Milwaukee decided to put a motor on a bicycle and they’ve been getting bigger and more unwieldy ever since. My biggest takeaway? People who ride motorcycles refer to cars as cages.  It reminded me that people who make modular homes say a regular house is “Stick Built.” I’ve always thought that was pretty funny. Not as funny as “cages,” though. Anyway, parking for “cages” is limited and inconvenient at the Harley-Davidson Museum. I suppose that’s intentional. Close-in parking was somewhat limited (for us).

Back to the subject of greater import: Cheese. So, we hopped in our “cage” and drove over Milwaukee’s other notable landmark, the old Pabst Brewery. It was shuttered long ago and is now, like a lot of old factories, being converted into mixed-use development. One of its few current tenants is a restaurant called Jackson’s that Yelp recognized for its Cheese Curds.

In we walked. Up came the waitress.

“We’d like the cheese curds, please,” I politely asked.

I wanted to say, “C’mon lady. Stop dillydallying, get me the curds!” But, of course, I didn’t.

“Well. That’s so nice” She went on with something that sounded like, “Blah blah blah. I haven’t put in your order for cheese curds yet. Blah blah blah.”

Apparently, Jackson’s isn’t a hopping lunch spot and she enjoyed the company we provided.

She went on (and on) with that genuine Midwestern Charm. I maintained my fake Southern “Bless Your Heart” small talk. All the while fighting my New Jersey “Get me the damn curds” attitude.

She finally did. And they were worth the wait… If I knew how to play the song, “Hallelujah” on the blog, I’d do it for this picture.

They were good. Well, “good” doesn’t come close. They were ?????????– ambrosia. So good that I have to borrow the ancient Greek word for “food of the gods” to express my pleasure. Unreal. One of the highlights of my eating career. I’m proud of myself for limiting my intake to 1/2 of one basket. I’m not proud of finishing my portion in less than forty-five seconds (I timed it). I’m even less proud of forgetting to check for the squeaking.

On the way back to Chicago, I texted with the bride from that wedding where I first discovered the noble curd. I shared with her how wonderful the experience had been. I struck a nerve when I mentioned that I’d visited Wisconsin. Apparently, there’s quite a rivalry between Minnesota and their eastern neighbor. She begrudgingly indulged that I’d made a wise decision to try Wisconsin cheese curds, but that I was wise for limiting my time in the State.

We don’t let them come west too often.