The sea ice was about 75 miles out and the waves were rolling in during my three days in Barrow.

If I were to describe my ideal destination, it would be…

So, when I arrived in Anchorage, I immediately went to work booking a trip north. 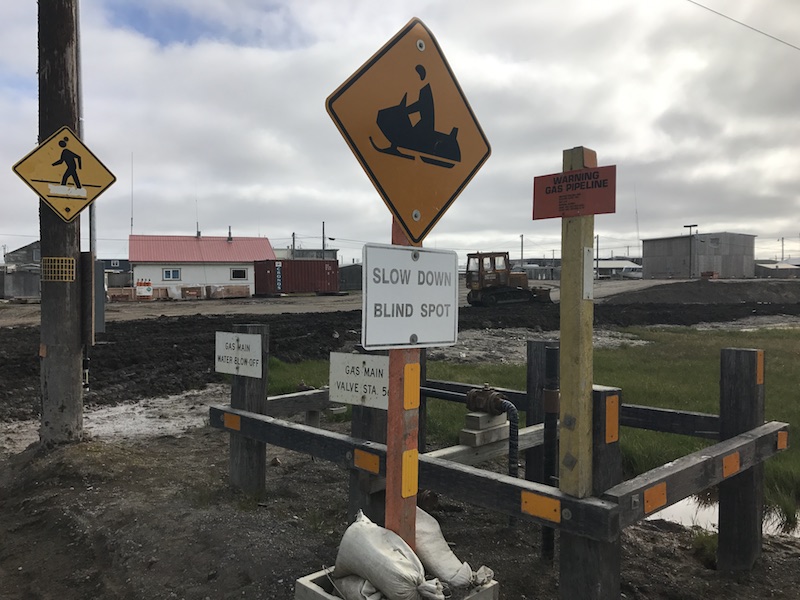 The primary mode of transportation probably isn’t the same as in your neighborhood.

Barrow is a village of about 4,000 people and is the largest city in the largest county-level political subdivision in the United States by area. In fact, the North Slope Borough is larger than the State of Utah!

And it’s also the northernmost community in the United States. It’s the 11th northernmost in the world. For those of you keeping score, with 35 people,?Ny-?lesund, Svalbard, Norway is the northernmost town on the planet. (And, yes, it’s on my list).

I went to Barrow because I?ve never been inside the Arctic Circle. I loved it because it’s such a special place. Not known as a tourist destination, my visit required some extra effort. Booking a flight with Alaska Airlines was the easy part. After all, almost everything in Barrow is brought in by plane, which explains the expensive nature of virtually everything at the local grocery store ($10 for milk, $17 for orange juice, $22 for coffee..).

The challenge came when I tried to find a hotel room.

With five hotels in Barrow, it seemed like it would be easy. Unfortunately, not only was it the “high” season (a relative term here), but all of the teachers in the Borough had come in for orientation during the two days I planned to visit. Thanks be to the Airport Inn!

After calling three of the five hotels, I was down to the last two. Thankfully, I was able to a secure a room in the Airport Inn for my first night and the King Eider Inn on my second. The best news? They are both within walking distance of the airport. Although with unpaved, muddy streets I?d be carrying my heavy rolling suitcase. Oh well…it was time for a workout! Leave town and you’re on Tundra, which is a trampoline-like mesh of mud, grass, and mosquitoes.

As soon as I stepped off the plane, I noticed two things: A bracing breeze and clouds of mosquitoes. But not like the mosquitoes you?re used to. I?ve heard jokes for years about the State Bird of Alaska being the mosquito. Let?s just say, it?s no joke! These things were ten times worse than the malaria-bearing mosquitoes back in Madagascar!

As I made my way to the Airport Inn, the cold became noticeable. Even though it was July 30, the temperature hovered in the high 30’s Fahrenheit and there was alternating rain and snow (these photos are from the next day). In order to distract myself from the weather,?I began making observations about Barrow. 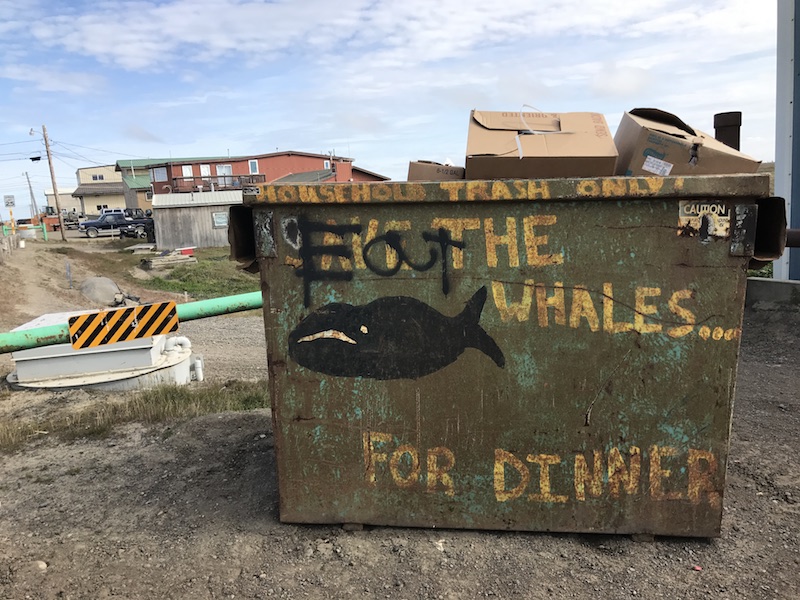 Barrow: Where dumpsters double as billboards. And Whaling is complicated.

It is an environment absolutely different from any other place I’ve seen. Although I was in the United States, it didn’t feel like any part of the country I know. Some of the buildings are made of metal, others of wood. They all look to be barely held together with, I don’t know? Duct tape, maybe? Windows are few and far between. Most of the structures are on stilts. Paint, where it exists, is worn away and chipping. The roads are mud.

When the sun sets in November, suicides among young people skyrocket. They go down again when the sun comes back up in January. Whaling is an important activity in the Spring and Fall. Although highly regulated, it’s a vital source of food for locals here.

In summer, though, it?s 24 hours of daylight, which made it hard to sleep (neither of my hotels had invested in heavy curtains). In fact, this was the first time on this trip when I struggled with sleep. Jet lag has not been a problem on this journey. Sweet and Sour Chicken for $20.

After checking in, it was time for dinner so, on the advice of the hotelier, I headed to “Osaka.” He said the Japanese restaurant had the best burger in town. “You have to try their burger,” he told me.

I wondered about the sushi, but who was I to ask?

Unfortunately, when I arrived ? at 6:30 p.m. ? they?d already closed for the day. So, I headed to the “next best option,” the Chinese Place (Sam & Lee?s). Although he’d also recommended their burger, I ordered the $20 Sweet and Sour Chicken instead. In the lower 48, the same meal would be about $8. 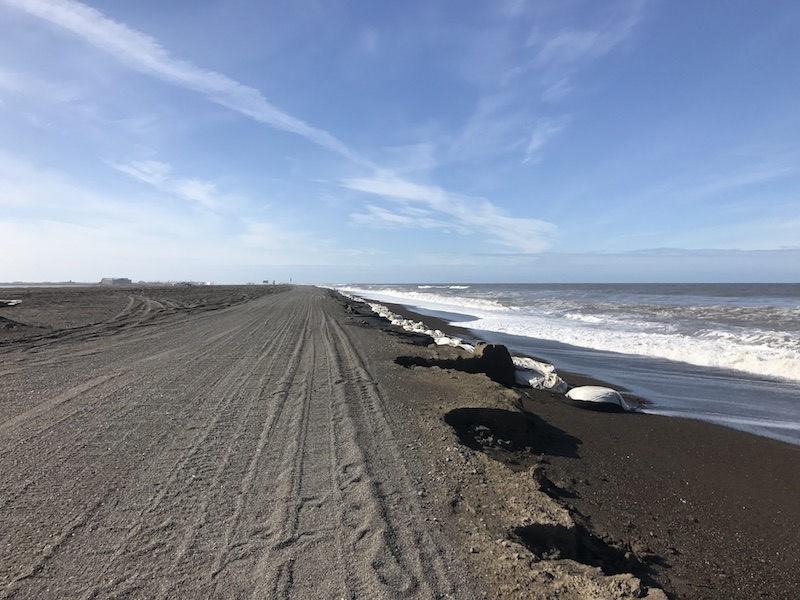 The road to Point Barrow (the northernmost spot in the US) is eroding quickly.

The next day, I?d arranged a tour with the only company in town offering one. I was shown a number of the town?s most noteworthy sites: The High School, the Police Station, the local Community College.

But, perhaps the most impressive place to me, was a hill, which collapsed during a recent storm. When residents went to look at it the following day, they discovered the intact remains of a 2,000 year old family who had hidden in their ice cellar to avoid another, more ancient storm. Their bodies, perfectly preserved, have been transferred to museums in Anchorage and Fairbanks for further study.

We also got to visit the site of what locals believe was an ancient village. Nothing much has yet been unearthed here and there are no nearby archaeologists, so it’s all just conjecture at this point.

The family was found just under this hill.

After the tour, I finally got that burger. It was also $20 and tasted like Miso Soup. I should have had the sushi.

The next day, it was time to head back to Anchorage ? and a more normal life (well, except for the earthquake that woke me up the next night). Life may be tough, but they’re quite proud.

Seeing places like Barrow and Mongolia serves as a reminder to me that all of the accoutrements and comforts I think are required for my life simply are not necessary. People live very different lives all over the world. All we truly need to exist and be happy are the basics: Food, water, relationships.

I don?t need an iPhone or a car or the internet. I could survive without them. These are all things I?ve grown accustomed to, but aren?t absolutely essential to my well-being. I?ve simply grown used to having them.