The buildings are all tall in Hong Kong. The people, however, tend to be a bit shorter.

Thanks to a colleague of mine, I found a bespoke tailor in Kowloon called Danny “Elegant Tailor” Cheng who makes suits for a pittance. I emailed Danny before I left and indicated the dates I’d be in Hong Kong. He said, “Just come by shop” when I was in town. By the time I landed, quite frankly, I’d forgotten about this exchange. However, waiting for me in my inbox, was a message: “When you come by shop?” Wow! With that kind of solid sales effort, how could I not go?

So, this morning, I went downstairs, hopped in a cab, paid about US$15 in fare, and walked into the shop. The experience was very pleasant; however, I think when he was saying, “you strong man,” he was really calling me — as Belk’s described my clothing as a child — “husky.” Oh well, I’m a giant in this city. And it’s all in the name of a good deal! And a good deal it was. Let me tell you! I got a custom suit for about what you’d pay for a shirt back home.

Further, one has not lived until one has had two Chinese men measuring one’s derriere while giggling through a language so foreign one can’t help but know they’re laughing at you. Occasionally, you’ll hear, “you have strong thighs ha ha ha.” Or “You play football? he he he.” All you can do is laugh in return. Hoping that you’ll walk out with a good suit. Get measured….And…four hours later, you have this.

And, when I asked Danny the best place to hail a cab, he laughed at me (again). “You need to take MTR.” He gave me directions and in no time, I was on the subway headed back to my hotel for about US$1. It dropped off in the shopping mall next to my hotel. Of course. Plus, on the way to the MTR station, I was treated to a nice park with plenty of flamingos. And many signs saying not to touch them. No problem there…bird flu, anyone?

The MTR, while convenient, takes the term “crowded” to a level that is difficult to articulate. The best I can do is to invite you to proceed to your nearest grocer (preferably, by way of public transit) and purchase precisely two cans of sardines. Please then return home (also by public transit) and open both cans. Pour one can into the other. Once that’s done, place one of the two tops back on. There, my friends, you have the MTR. I was the tall sardine in the middle.

Anyway, I was hungry so — as I was instructed by my doctor when such a symptom arose — I ate. The restaurant I happened into was quite nice and I had lobster soup and some sesame chicken. 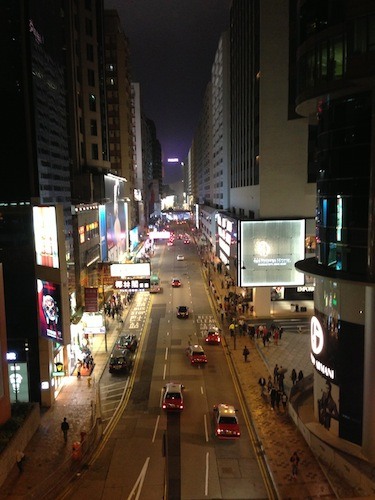 It’s big. Dwarfs New York, if you ask me.

There’s one thing I’ve noticed in my short time here in Hong Kong. If one person could do a job, they’ve got at least two doing it. Remember the ride in? Two drivers. Well, this restaurant took it to an extreme. There were two people to help me sit down. One person to bring a menu. Another provided some water. Somebody else brought the bread. The soup came from another person. The sesame chicken from another. The dessert menu, which I refused, was offered by somebody new. If you got up to go to the bathroom, someone walked with you until one of the other people had a chance to catch up and walk you out. I waited to visit the bathroom until I got back to my room.

Unfortunately, there was a delay in getting “home” because I had no idea whom to ask for the bill. I needed to get out of there, too. Do you have any idea how difficult it is to eat with chopsticks when there are Chinese people staring at you? Especially when there are bones in your sesame chicken.