The sunrises are beautiful here.

I’m writing this post from Bali using only nine fingers. Something stung me yesterday rendering my left ring finger useless. But I’m not going to let that stop me from posting some of my experiences from this trip to Indonesia’s island of Bali.

(UPDATE: I read on the internet that toothpaste relieves the pain from a sting. Although my finger’s still frozen, the pain has mellowed. I’m not sure whether it’s having a psychosomatic effect or it really works. In either case, I don’t care. You may not, either, but I’m all about providing practical advice here!).

Bali: My First Time at a “Beach Resort”

First thing’s first: I’ve only seen a tiny sliver of this spectacular island. And that was by design. Usually, my trips involve seeing as much of a place as I possibly can. I select a centrally located hotel and spend as little time in it as possible. This time was different. I haven’t ever tried the “beach resort” experience. So, I did it here. 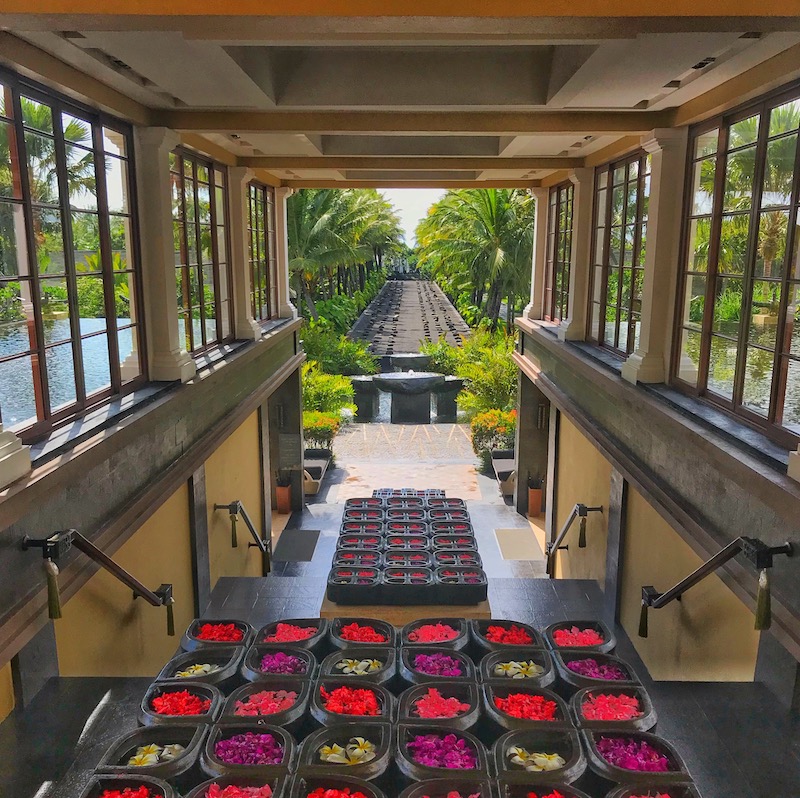 This hotel is truly beautiful!

I lasted about 36 hours before I went crazy. I’m not good at sitting still. This, of course, is something for which I should seek therapy, but I’ll save that for my return stateside. For now, I was ready to get away from the beach, the swimming pool, and the drinks with little umbrellas behind in order to see something more of Bali. Ubud is home to many rice paddies, which are beautiful even on a cloudy day.

After organizing a guide and driver, I was off. We headed to Ubud, a touristy part of Bali filled with art galleries, fish spas, and other tourist traps. My guide told me his multi-syllabic name, but instructed me to simply stop at the first one, “Crrrreee” He trilled his “Rs” in a way that would have certainly impressed my Spanish teacher. I enjoyed every time he said, “Rrrrright overrrr therrrrre is a rrrrreally imporrrrrtant temple.” And he said it a lot, there are a lot of temples here. The temples are stunning. This one is known as the Ubud Water Palace- Puri Saraswati Temple.

You may know (I did not) that Indonesia is the world’s fourth largest country (behind China, India, and the United States). There are some 260 million people living among its 17,508 islands. 4.2 million of those citizens call Bali home. The doorways are so beautifully carved here.

Unlike the rest of Indonesia, however, Bali is predominantly Hindu. Incidentally, Indonesia is the world’s most populous Muslim country. Nearly every family compound in Bali includes a private family temple. In addition, there are also public temples in most of the villages. In short, Bali contains many temples. I had the chance to visit one of them in Ubud, which required me to put on a Sarong. Sadly for you, I failed to capture a photo of me dressed in what we would call a “skirt” back home. This shrine is designed to frighten evil spirits.

Crrrreee also did a nice job of giving me an overview of the island. He told me where the Australians like to party (most of the island, it seems), where there?s good hiking, and also where to find the “best bitches.”

Come again?! Yes, the “best bitches.” He must have said it seven times before I realized he was referring to the “beaches.”

This is the door to the private parts of the Royal Palace in Ubud. Although they no longer have any official “power,” the family’s members remain some of the richest people in Bali.

After a visit to the Royal Family’s palace, Crrrreee asked me what I’d like to do. Seeing that it was noon, I figured we should eat.

Death by Spice in Bali

“Whatever you would eat if you weren’t with me.”

“Are you sure?” He responded with a questioning smirk.

We snaked our way across a street and around a corner, walked up some steps, and arrived in what Crrrreee described as the best Babi Guling place in all of Ubud. He told me I could ask anyone, and they’d agree it was the best. By far. Judging by the faces of my fellow diners, the secret was out. In other words, Crrrreee was the only local I saw there.

Finally, I got the nerve up to ask the question you may also have.

“Ahhh. Suckling pig, slow roasted. Here they prepare it four ways and bring it to you.”

Oh. So it’s like good old-fashioned North Carolina Barbeque, I thought. I grew up on the stuff. No big deal, right? Wrong.

When the plate arrived, it came with soup and a mountain of rice. Here’s a rice granary, which didn’t hold enough rice for me to finish my meal…

“Sometimes in the hotels, they prepare this. But they don’t do it right. There’s not enough spice.”

I took my first bite as Crrrreee was telling me about his two daughters. I immediately burst into tears. I think he thought I was very sentimental.

This was one of the spiciest meals I ever had. Thank goodness for the rice, which quickly went from mountain to molehill as I used it to soothe the burning session.

For the first time in a while, I struggled to finish my plate, but I did my best.

Crrrreee told me a visit to Ubud was incomplete without a stop at a coffee plantation. He didn’t let the fact that I don’t really drink coffee stop him. For a guy who doesn’t drink much coffee, this was a lot to take in. I bounced from the walls for a while after this…

I’m glad we went. He introduced me to the most expensive coffee in the world. Luwak coffee is made from beans that have been partially digested by an Asian Palm Civet. It’s a small cat-like creature that eats the beans to aid in its own digestion. Farmers then collect their feces and pick out undigested beans. Yes, you read that right, the beans are, as Crrrreee put it, “picked from the poop.” I got some poop coffee for my brother. But do me a favor, please don’t tell him what it is until after he’s digested it himself. He doesn’t read this blog.

Things are quieter than normal on this island right now. In fact, there are so few people at my hotel that everyone here knows me by name! Tourism is down because the main volcano, “Mt. Agung” has been giving indications that it may erupt for the past few months and that has dissuaded many tourists from making the trip. The good news for me? I fly out in a few hours. The better news for the island? The volcano’s ire seems to have dwindled. We also stopped by the famous Monkey Forest in Ubud where visitors are warned not to look the monkeys in the eyes for fear of attack. I’m always looking for great stories for this blog, but I figured that wasn’t worth the risk…

This has, of course, been bad for the island’s economy, which relies almost entirely on tourism. If you’re thinking about making a visit here, please add it to your list. As I mentioned, I’ve only seen a sliver, but it’s been an impressive place!