FacebookTwitter
[This is the third in a three-part series of posts about my most recent trip to Australia and Fiji. If you missed the first post, check here. For the second one, click here.]

When my friends back home found out that I was going to Fiji, they were shocked. See, I’m not exactly a “beach-goer.” As you’ll come to find out, it made this part of the adventure that much more interesting (and that much more painful…). Yup. They serve Fiji Water in Fiji. And they have special Fiji Water holders. But, as I learned, you don’t want it “fresh” from the sink.

Having survived Australia, it was time to head to Fiji. Everyone we told about our next stop couldn’t stop gushing. Not about the beautiful scenery — Australians are used to beautiful scenery. It seems it’s not a big deal to them. What they were most impressed with is the friendliness of the people.

“Bula!” is “hello” in Fijian and everyone says it with a smile, we were told.

They also operate at a slower pace than most folks (i.e., me) prefer.

That’s the standard way of saying, “I’m not going to get you what you want anywhere close to the time you want it.

When we arrived, the band struck up, a necklace of shells was slapped on my neck and we were whisked — at a remarkably slow pace – to the hotel.

When we finally arrived — the five-mile journey took about forty minutes — it was time for dinner (we ate A LOT on this trip) so we headed to the Denerau Island Marina where there are a number of restaurants and shops. We sauntered into one and took our seats.

As you’d imagine, we were happy to be in this tropical paradise. It is truly beautiful and we kept asking ourselves how we could be so lucky?! Apparently, not everyone felt the same way…along came our waitress…

“How ya doin’?” Trevor jovially asked.

“I’ll have the chicken schnitzel, please.”

But, for me, her warnings really served as prescient advice. Fiji, it turns out, is quite a dangerous place for a city dweller like me.

The bugs really took a shine to my sweet North Carolina blood. And the sun is particularly potent, especially when you go snorkeling without having seen the sun in half a decade. And, the coral can actually leap from the water and attack you. Or at least that’s how I remember it. It isn’t exactly an unpleasant place.

Trevor and I rented a boat one morning. We wanted to see a couple of places. Like “Cloudbreak,” which is apparently the number one best surfing spot on the planet. Once we got there and watched a surfer take a wave, I pointed out to Trevor that this was the first time I’d ever seen surfing. He was shocked. Apparently seeing Cloudbreak is every surfer’s dream and here was I ignorant of the near-religious significance of these waves. Who knew?! This uninhabited island was truly stunning. And it became ours for a few minutes.

Once we’d seen enough surfing, which, for me, was a moment that occurred a few minutes before we started watching surfing, we set off for an uninhabited island. Considering 100 of the 300 islands in Fiji are people-less, this is easier than it may sound. Of course, it turns out there are no docks on uninhabited islands. Again, who knew?! So, we had to snorkel to the beach. That involved some deft swimming. Which is a challenge if you, like me, haven’t been in the ocean in a quarter-century. I also learned that it’s important to follow Trevor’s advice.

As I struggled to walk through the water up to the beach, I couldn’t help thinking, “Boy! It sure is hard to walk in these flippers.”

As a land lover, it never occurred to me that these two things might be connected. His advice suddenly made sense when the coral jumped up out of the water and dragged me down onto it, I finally made the connection. Who knew?!

Despite my bloodied hand and newly formed limp, finally walking on that uninhabited island was one of the most amazing experiences I’ve ever had. In part because of its beauty, in part, because we were the only ones there, and in part because of the struggle to get there.

I have no pictures from the island since my phone isn’t waterproof (c’mon Apple!). Although, I suppose it’s good to actually experience life?with your own eyes occasionally rather than through a screen as you’re snapping pictures.

After our morning on the boat, we felt all the more connected to Fiji. So, when we noticed that there was a “Taste of Fiji” dinner at our hotel, we signed up.

As it turns out, there’s a reason Fijian food hasn’t made the splash that, say, Mexican or Italian claim. In my experience, I could say it earned a spot among the three worst meals I’ve ever had: A Bowl of Bottom Feeders.

For example, the opening course was a dish that translates, roughly, to “unidentified bits of bottom feeders.” It was more than disappointing. At least I liked the lime. It was in the Singapore style, which I managed to avoid in Singapore for fear of the unbearable spice (spicy food scares me).

The main course was  “mud crab prepared in the Singapore style,” which means spicy. It was good. If you like your crab to be unbearably hot and soupy. The spice was intended. I think the fact that the meat was liquified was an accident.

I looked up from the soupy mess that poured from the crab and saw Trevor laughing so hard that he was crying. I mentioned earlier that Trevor has a great sense of humor, but this was on another level.

“What’s so funny?” I hadn’t said anything “typically American” up to that point.

Finally, he got control of himself about the time I’d cracked open another leg…

“A cockroach just crawled out of your crab.”

It’s funny, you know. Australia is supposed to be dangerous and Fiji is beautiful. Well, the joke was on me. Australia was wonderful! Fiji, on the other hand, bit me, burned me, broke me, and disemboweled me (no details here, but suffice it to say that you’re supposed to use bottled water to brush your teeth).

Look, don’t get me wrong! There’s no doubt that Fiji is an incredible place and I’m a lucky guy to have been able to visit. Let’s just say this trip confirmed that I’m more of a city slicker than a beach bum. With that said, take a look at some of the incredible views… 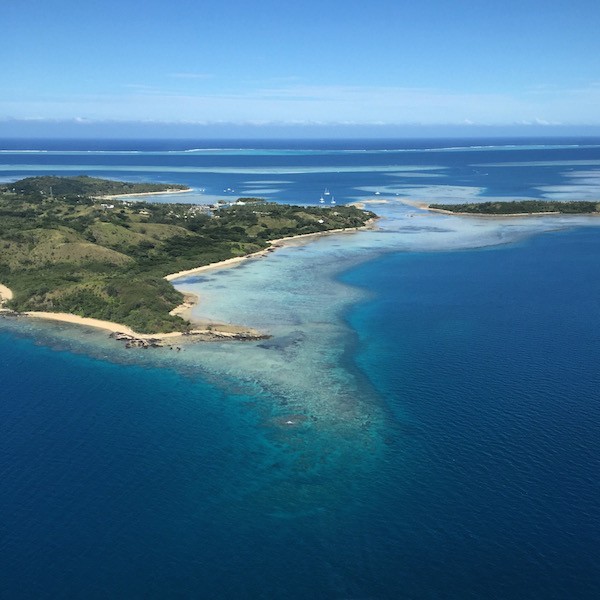 An aerial view of one of Fiji’s outlying islands shows a reef like the one that leaped out at me. Sunrises were some of the most beautiful I’ve ever seen.

On our last night, a couple wed on the beach. They lucked out with an unbelievable double rainbow for their photo session. If the sunrises were beautiful, the sunsets were spectacular!

So, the takeaway? The slivers of Australia and the South Pacific that I saw were full of adventure and good times. Made all the better by getting to spend time with a good buddy like Trevor.

The people, as always, are what make a trip memorable for me…

It will be a long time before I forget the characters I met on this adventure!