Millionaires Around Every Corner Where are you going? Me? I headed to Southwest Virginia and Southern West Virginia.

Teddy Roosevelt believed success came to those who were in constant motion (he also suffered from bouts of depression when he wasn’t moving, but that’s beside the point). He often played a game with his family where they’d all march forward in a line. The rules were simple: Don’t change direction. They’d have to climb rocks, ford creeks, and even scale walls. The game ended when Ole Teddy said it ended. It could apparently last for hours.

While I’m not a “gamer” per se, I do abide by Teddy’s view that movement is advisable. So, when I looked at my calendar and saw a blank spot, I decided to hop in the car to visit my Mom who lives in Southwest Virginia.

After a leisurely lunch at her local Wendy’s, I decided I wasn’t done moving and turned the car toward the very bottom of West Virginia. We were heading to the town of Bramwell. Bramwell boasts 364 residents and a remarkable history. At the end of the 19th century, this part of the world was producing massive quantities of coal. Coal, as I’m sure you know, was used to power the country’s industrial boom. This led speculators, investors, and businessmen to flock from the north to take advantage of the sudden opportunity. Those who hit it big built Victorian mansions to display the success they’d dug up. And, according to the all-knowing Wikipedia,

“In the late 1800s the town acquired some notoriety for having the largest number of millionaires per capita in the United States.” These houses are huge!

Today, many of their houses remain. Some beautifully restored. Others in some form of ruin. This one’s past its prime. That’s just a foundation.

As my mom and I walked around the small downtown area, I reflected on this history. I thought about how much had changed for this part of the world. I was reminded of Valparaiso in Chile, another place that had gone from boom to bust. While I was lost in my deep thoughts, my mom was struck by how cold it was. “Let’s get back in the car.”

We headed to Pocahontas, which is just over the border in Virginia. While Bramwell was where the coal operators lived, Pocahontas was home to the workers. Its streets are lined with much more modest houses and lots and lots of churches. 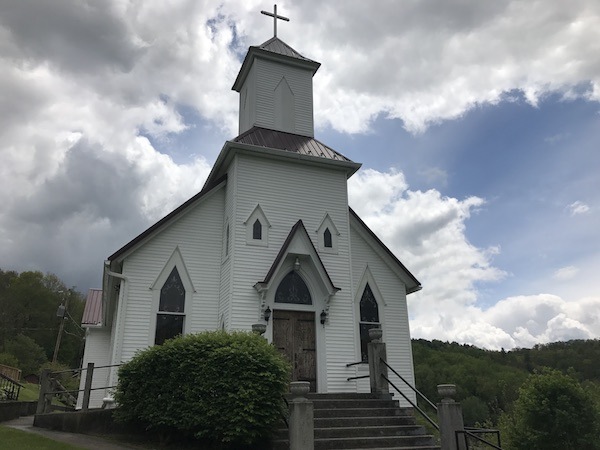 St. Elizabeth’s Church is home to massive, life-sized murals that I didn’t get to see.

One, St. Elizabeth’s Catholic Church has ten huge murals reminiscent of the finest Italian frescoes. Or at least that’s what my mom told me. The door was locked, which I discovered when she kept chiding me to try to break in to see the murals. “They’re unbelievable!” There are beautiful stone buildings that were made by some of the finest stonemasons on the planet.

And that level of skill should come as no surprise. The wealth that existed here in the late 19th and early 20th Centuries was vast. And skilled artisans from every part of Europe came to find work in and around the mines. Pocahontas has adapted its run-down areas. There are now picnic tables in the burned out fire station.

After having our fill of education, I pointed the car back toward my mom’s place for a mint julep. Just in time…things were going downhill. Yes, that’s a toilet and the Ten Commandments.

And, there you have it, a surprising visit to a surprising corner of our planet that proves there are fascinating stories everywhere. You just have to look.