“Let’s do that on Monday,” I suggested in a meeting last Thursday.

“Umm. That’s Labor Day. The office is closed. Right” someone said with a tone of desperate hope.

She was right. I’d failed to load “National Holidays” into my calendar. As a result, I had no idea we could enjoy a long weekend until 48 hours before it began. That opened a world of possibilities. I Googled “Delta Route Map” to see where I could go.

It was my own Goldilocks moment: The first one was too close, the second too far, and the third…just right. This trip was much faster than it would have been only a century ago.

The trip took me from my home in Greensboro, NC to Atlanta to Salt Lake City, and on to Jackson Hole. The most eventful leg by far was Salt Lake City to Jackson Hole. After refereeing a wrestling match between my bag and the overhead bin, I settled into my seat. Suddenly, the gentleman two rows ahead caused quite a kerfuffle.  What’s up with that,? I wondered.

Turns out he was ready for a refill.

“More,” he commanded while waving an empty high ball glass in a pseudo-circle in front of him.

“Where’d you get that” asked the youngish Flight Attendant.

“You mean you stole it? I can’t get you anything else.”

“Because you’re inebriated,” she confidently responded. I heard her mutter, ‘And this is Salt Lake City.’

“Yup,” he said before donning his headphones and playing Boston’s Peace of Mind loudly enough for all of us to enjoy.

The Flight Attendant went about her business. So admirably, indeed, that following the safety briefing, our thirsty friend removed his headphones (forgetting to pause his music) and tried to tip her. She declined, “It’s against company policy,” she told me. I was hopeful the guy wouldn’t cause too much of a ruckus so we could get in the air. Fortunately, he calmed down quickly.

Anyway, after landing in Jackson Hole, Wyoming, I climbed past the drunken gentleman who, despite a very bumpy flight, was now passed out.

From the airport, I took a cab for the 20-minute ride into town.

It turns out that 97% of Teton County is Federal land. What do you do when you’re surrounded by unbelievable natural beauty and have so little tax-generating private property? Pump in the tourist dollars, of course! And also, it turns out, get really rich people to move in. The County has the highest personal per capita income in the country ($132,728, which is greater than Manhattan’s $120,790). 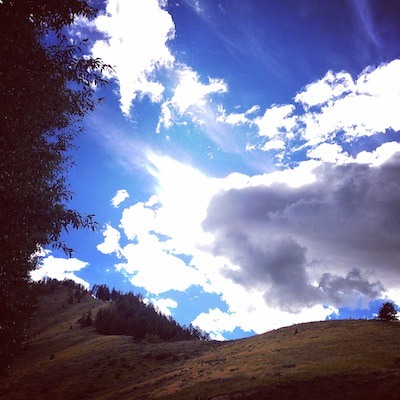 Thanks to the front desk clerk at the Wyoming Inn, I learned about the Start Bus, which is not frequented by Teton County’s rich and famous.

It’s a free transportation network that’s also a great way to make new friends. There was, for example, the guy who told me (and everyone else on the bus) without prompting that he’d been  “legally dead 3 times.” He also shared with us that he’s lived in Paella along with another 37 states and 6 countries. In case there was some question, “I was completely twisted on cocaine for half of it.” Mmmm. M&Ms. Wonder if they were purchased locally or back in Paella?

There were a handful of places that I’d decided I wanted to hit up because of their positive reviews on Yelp. One of them was the Snake River Brewery. Fortunately, my bus mate didn’t have the same idea. I grabbed a seat at the bar and ordered a hamburger and an IPA. Two guys from Denver and a local woman had the adjacent seats. Unfortunately, I left my stickers at home.

“Hi! I’m Camber, this is Chris and Dave. We just met. But they’ve got great energy.”

After earning her undergraduate degree, “Camber” became a journalist for the local alternative paper. She never left. But that’s not cutting it so she DJs weddings and waitresses at a Thai restaurant for extra cash. She’s got a sister who traps prairie dogs. Apparently that’s a thing. The sister’s temporarily laid up though because a prairie dog bite is bad. Very bad. Camber also just got a “Soul Reading” in which she learned about her past lives. Turns out she was on the wrong end of WWII. She didn’t go into detail but did tell us — wide-eyed — that it explains her fear of small spaces.

She had a lot to say. She must have been quiet in that previous life.

“After this, I’m going to Idaho for a potato digging party,” It was going to be a big night for Camber.

“I mean, we’re going to dig potatoes,” she explained with her hands. “It’s only like 20 minutes away or something. You guys should come. You’ve got great energy!”

Chris, Dave, and I made the right call. We passed. I headed back to my hotel room instead.

I spent the next day exploring downtown Jackson. When dinner time arrived, it was time to try another Yelp recommendation — the Rendezvous Bistro. 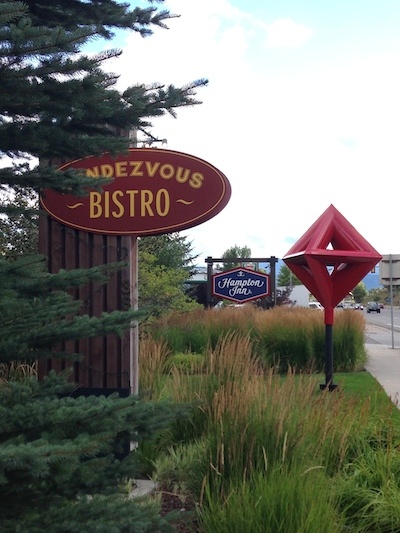 Yes. It’s stuck between the highway and the Hampton Inn.

“I’m tryyyyying to decyyyyyyde what to drink,” says the woman seated at the table next to mine.

She asks to taste five different drinks including, but not limited to a local craft beer called Pako’s, the house Pinot Noir, and something called Wyoming Whiskey. I don’t know how she tasted anything after the fourth one. But, then again, maybe it wasn’t the flavor she was after. She settled on the Pinot Noir.

Anyway, the drinks menu proved more interesting than her date. She read it with the occasional editorial comment while waiting for her Pot Stickers to arrive.

“What’s this? A South African wine!? I’ve never even heard of that. How can they make wine in Africa? I mean, c’mooooooooonnnn. But I’ll try it.”

“May I possibly please have umm one more beer, please,? “asks her husband.

She’d ordered the beef, which she decided was overcooked after eating about half of it. Naturally, it needed to go back to the kitchen. Bold move, lady. Bold move. I noticed a theme. There are many locals who, despite surviving on the dollars of tourists, seem to despise us. I overheard one woman at a restaurant I infiltrated called the Local Restaurant:

“I’m finally done with my freaking day of making caramel freaking macchiatos and iced freaking cappuccinos for people from freaking Idaho and freaking Colorado. It’s time for a beer. NOW!” There was a lot of rage there. I kept my head down and my North Carolina accent to a minimum.

An early morning had me in bed early, too. That means I missed out on seeing more drunk people.

My time in Jackson was great. Maybe it was a Labor Day thing? Maybe it was the free Lynyrd Skynyrd concert (that I missed) on Sunday night? Whatever the reason, it was a fun trip, and, other than a couple of demanding restaurant-goers, everyone was in a great mood. Sure, there was an air of superiority given off by some of the locals (certainly not Camber), but that’s not so much my problem as it is theirs.

Next time I go, I’ll rent a car to explore. Jackson Hole is reminiscent of Queenstown. There’s plenty of adventure and beauty. Yellowstone’s just around the corner and The Tetons taunted me. But, I resisted and hopped back on an airplane a short 36 hours after I landed. Fortunately, everyone seemed sober on the return trip.