A Difficult Entry into Madagascar Crossing over the northern coast of the African continent. The Sahara looks a lot less welcoming than this plane.

Making it into Madagascar proved challenging last night. A ten hour flight rapidly turned into twelve hours on the Air France jumbo jet, thanks to a delay that was never defined (at least in English). As the hours passed, I grew increasingly anxious to get out of the plane – an unusual feeling for me. More often than not, I’m eager for a chance to jump on board a plane. Especially a long-haul flight. But, this time I was ready to be off, free to discover another country.

Well, I had another thing coming. We flew right over Mt. Kilimanjaro. Too bad it was dark and I couldn’t see anything.

After landing, air stairs rolled up to our giant 777 and people began jostling to get off (with more vigor than a normal flight to say, Orlando). As I slowly made my way to the door, the anxiety built. Finally, walking down the stairs to the tarmac, people began running.

I soon discovered why. I got to know the inside of that jet very well.

As the 468 passengers entered the tiny terminal building, we faced a wall of security. Somehow, I ended up pushed into the diplomatic line (I noticed several light blue, UN Passports in the hands of fellow passengers). I was whisked through like your average diplomat. Everything went smoothly until I met a second agent.

“You have no Visa. You need Visa, Over there!”

Away I went, further guided – pulled, really – along by the pressure of so many people endeavoring to get through this process more quickly than was possible.

I learned long ago that the name of the game in a situation like this is patience, focus, and a certain degree of resignation.

Eventually, for US$30, I got my Visa. And here’s where things get downright bizarre. 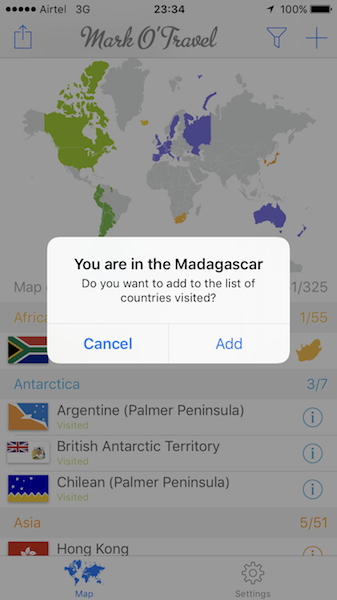 This is the 52nd country or territory I’ve visited on my quest. I’ve been through my share of immigration and customs lines. But none have been quite like this.

After getting the Visa, I was literally pulled along (this time by a man in a uniform) to a third line. It’s tough to call this a line, actually. It was more like a mass of humanity. The man pointed to my passport,

“You, here” he said, pointing to the center of the mass of people. At this point, we’d been on the ground for nearly an hour. That’s right, this whole process had taken a full hour!

Eventually, as I was standing in the midst of this group, the man in a uniform pointed at my passport, said, “Here!” pointing at a desk near the front of the mass. He wanted me to put my passport on a table.

Now, remember earlier I said one element in this situation was focus and another resignation? That switch got turned off — I did not want to part with my passport. This was not the time to be handing it over. I’ve seen enough movies and read enough books to know that could be a very, very bad idea.

“You give to police.”

That’s not exactly what I wanted to hear. A man in a uniform in a country whose language I don’t speak instructing me to give my passport to the police?

I have seen enough movies and read enough books to see that I had much choice at this very moment. So I put it on the table.

He then told me to step on the other side of the table.

“I’ll wait here with my passport.”

He then smiled and told me in no uncertain terms I needed to wait on the other side of the table. Now, keep in mind there were hundreds of other people in the same situation as me. They seemed to go through this harrowing process themselves. From joy (“I’m in a new place!”) to confidence (“Should be out of here soon!”) to fear (“What’s happening?”) to dread (“I don’t understand!”) about what was happening.

After some careful observation, I worked out what was happening.

They’d turned the immigration process (undertaken by a single person in a booth in virtually every country on the planet) into an assembly line involving seven people.

One person received the passport, another looked at it, a third stamped it, number four signed it, the fifth person stamped it again, a sixth reviewed the work, and finally someone else looked over the work again, signed it again and called out the person’s name so they could clamber to the front and collect it.

To say this was inefficient is an understatement. I don’t know whether this is an African thing or something unique to Madagascar. Any insight fellow travelers? Please comment below…

To make matters worse, it became increasingly clear to me that US-Madagascar relations may not be that positive. Or else, these particular immigration officials didn’t like my passport. At each stage, it went all the way to the bottom of the pile.

I was finally out of there by 1:00 a.m., some two hours after we landed (just in time, I might add, for a quick conference call with my brother/business partner…no rest for the weary!).

When I walked toward the exit, I was harassed by taxi drivers who didn’t understand when I said I already had a pre-arranged ride. I passed up on an opportunity to ride in a cab like this one.

Finally, at the front of the airport, I saw a sign with my name. Thank goodness! My long national nightmare was almost over! I greeted the driver (Joe) who had to fight his way to the front of another mass of people, many of whom grabbed at me and my suitcase to – I think  – offer their  cab services.

After a twenty minute drive, we arrived at my hotel for the night, which can best be described as a thin-walled bed and breakfast.

I’m writing this as I wait for breakfast and, despite being very tired, can’t sleep through the crowing rooster on my balcony.

Now, let’s see what Madagascar has to offer! I meet my guide in 15 minutes. More to come!